Our Senior Citizens' Drop-In Centre has enjoyed a very busy and pleasant year. Membership to date of paid up members is two hundred and ten. There are about two hundred and fifty senior citizens residing in Elk Point. I would say that 210 members say something good for our very thriving society.

I have been secretary of Pioneer Cycle since its inception early in 1973. It is most gratifying to me to be part of such a wonderful group of elderly people of varied cultures yet who function as one happy family.

Early in the new year, it was decided to ask the town to have an encumbrance agreement drawn up by a lawyer so that the Drop-In Centre Building would be assured of remaining on this present site in years to come. A delegation consisting of Nellie Merrick, Hazel Hannah, L. Garneau, Art Miller and Anne Kates attended a meeting of town council in February to propose the matter. The town agreed to engage a lawyer to draw up this agreement. This has been done; the secretary for the Pioneer Circle has copies which in part agree with theabove stipulation and the agreement has been registered with the Land Titles Department for Alberta. Our copies have been placed in our safety deposit box in the Toronto Dominion Bank vault for safe-keeping. 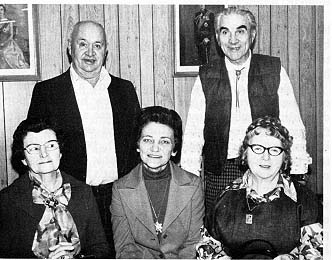 Mr; Joe Henderson was invited as guest speaker at our annual meeting on March 31. Mr. Henderson spoke of the work and aims of the society of Canadian Pensioners. We paid the ten dollar membership fee because it is a worthwhile organization to be part of. This organization is concerned with the needs of the elderly and is continually bringing these needs and desires before government for consideration and assessment.

Pioneer Circle took three trips during the last year, each trip by chartered bus. The first was to Fort Edmonton and Museum and Archives; later we went to Lloydminster to visit Fuch's Wildlife Display and Museum and then the Imhoff Art Gallery. The last trip was to Two Hills, Alberta to be part of the town's fiftieth anniversary celebration. Although the weather was not the best at times, everyone enjoyed the day's outing. 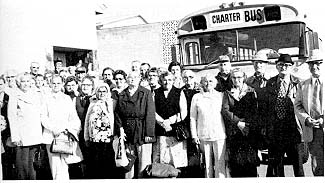 A start was made in landscaping. The gentlemen members prepared the ground and planted grass and ten young spruce trees. We are hoping to do more cultivating in 1978 to prepare the grounds for lawn-bowling.

A Father's Day Tea and Bake Sale was very successful and brought in net proceeds of $556.76 to help our club financially.

Pioneer Circle is glad to have been the first to celebrate the first Heritage Day Holiday in Elk Point on Monday, August 1. Everyone in town was invited to attend if they wished. Some of the members were dressed in costume of long ago and a social afternoon was enjoyed. Tea was served in the afternoon. At 5:30 p. m., we served supper. This was Kentucky Fried Chicken at one dollar per plate to members. The balance of the cost of $235.00 was borne by the club. About 175 people enjoyed the supper. After supper, Mr. 0. Hunt showed some slides to round out an enjoyable day.

On November 11, the Remembrance Day holiday, we held an open house social. The ex-service men came in their stepping-out attire; the ladies who were members of the now inactive Elk Point Auxiliary to the Canadian Legion wore their jackets and berets. Brownies, Guides and their leaders, as well as Cubs and Scouts joined in, and all assembled outside of the hall and on command by 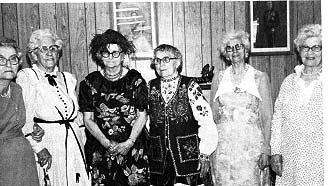 SENIOR MEMBERS ALL DOLLED UP FOR HERITAGE DAY CELEBRATIONS

Mr. Joe Price, gave a salute and stood at attention for a minute of silence as a tribute to the fallen dead of two World Wars. The service then continued inside the building. Amid Flag draped tables, Rev. Bateman delivered a very memorable address. Lunch was served to all present. The afternoon continued with socializing in any manner that one desired.

To round out the social events for the year, we held our fifth Christmas supper on December 9, in the Elk's Community Hall. Instead of the traditional turkey supper, we served Kentucky Fried Chicken and Christmas cakes and pastries and all the accompaniments fitting for Christmas. In spite of extreme cold weather about one hundred and forty people attended. The charge was again one dollar a plate to members, including the cost of hall rental and music for dancing. The cost to the Pioneer Circle was $355.00.

In retrospect, the year has been very gratifying. Financially, we have done very well. In September we refused help financially from the P.S. S. Board who were paying our utilities, until such time as we are in need of financial help. As I record this in January of 1978, we have managed very well through our own resourcefulness. 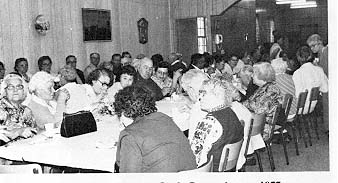 The following are members of the board: 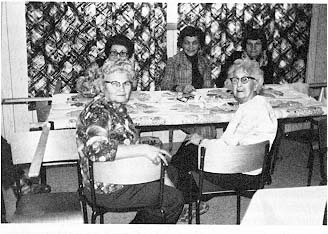 We are sorry to have to record the death of four of our members. They are Mr. Bill Keller, Mr. Harold Smith, Mr. Zenko Yacyna and (Mrs.) Nettie Flanders.

The future for Pioneer Circle is very bright. We have a Drop-In centre with facilities for varied recreation such as social gatherings, cribbage tournaments, whist drives, dances once a month, Saturday evening socials every two weeks, shuffle board, pool, table tennis, bingo, physical culture, ceramics and quilting. We could have carpet bowling but our building is now getting to be too small to accommodate more forms of recreation.

We have as in the past years, helped financially and in any other way we can to be of service to our thriving community 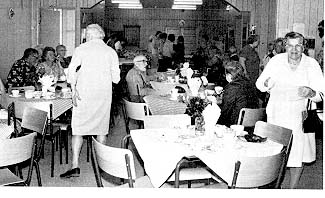 What sunshine is to flowers, smiles are to humanity.