1977 was indeed a successful year for our ladies' softball team. Winning the Big Four Fastball League was a dream when our team first reorganized, but with the help of all of our team members and our coach, Ed Pankiw, the dream came true-we won the League. As well, Chris Merrick who had the highest batting ave~~ge in the League received the batting trophy for 1977, a great honor.

We started practises towards the end of April and by May 21 were playing ball in the Big Four League which consisted of five teams, Marwayne Marauders, Mar-wayne Midgets, Dewberry, Kitscoty and Elk Point. Two games were played a week, one at home and one away. We managed to win all of the League games, landing up in first place. We took the semi-finals against Kitscoty by winning two games straight. The finals, which were also two out of three proved to be more of a challenge. We won the first game and lost the second game. The third game was a battle till the end but we won, defeating Marwayne by a score of 13 to 12, thus receiving the Big Four League trophy for 1977.

Because we had topped the League, we then hosted the All-Star game which was a bit disappointing as some of the All-Stars never showed. Not to spoil the day completely we gave some of our players to the All-Stars and had a game anyway. After winning this game, we treated all the players to a wiener roast.

As well as playing in the League we also took in tournaments. We took first in the three tournaments held at Whitney Lake. Towards the end of June, we had played about twenty-one games and were undefeated. Perhaps it was this reason that encouraged us to enter the ladies tournament at Sangudo, some eighty miles away from Edmonton. Forty-eight teams were entered in this tournament including teams from Calgary, Red Deer, Saskatoon, Edmonton, Lashburn, Whitecourt, Mayerthorpe, Spruce Grove, etc. So, July 1st saw us all camped at Sangudo playing ball. It was here that we lost our first game of the year. We dropped into the B section of our event but managed to take the top prize of one hundred dollars for the event. A most enjoyable week end had been spent, not to mention the rain which delayed some of the games. We had just finished our final game against Spruce Grove when the storm really took hold. As well as camping and playing ball we were also able to watch some super fastball being played.

Thus, with the help, encouragement, and coaching of Ed Pankiw, and the cooperation and good playing of our team, we had a successful as well as an enjoyable season. We wound up the season with a steak fry at Campbell's farm. It was almost sad to see the ball season come to an end-it had been a great year. 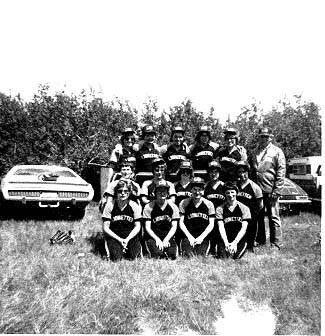 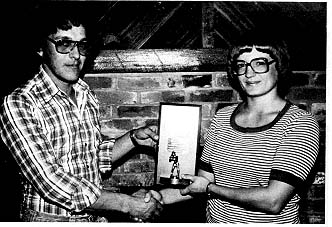