by B. Sumpton & I Borowsky

The settlers who arrived in the Elk Point area from 1907 on were mainly Protestant-Lutheran, Presbyterian, Methodist, Anglican and Ukrainian Catholics. In September of 1910 an Anglican Church building was started in Elk Point by C.D. Smith, J.C. Lambright, Earl Bullis and George Shortridge. The building was never completed due, no doubt, to lack of finances.

In 1911 Mr. W. Hobden came west as a Presbyterian missionary to the Hopkins area. He travelled on horseback throughout the area, holding services. 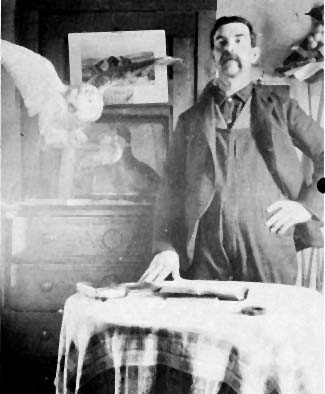 Mrs. C.D. Smith tells in a letter that the Presbyterian Society sent out a college student, Mr. Orton, who preached every Sunday during the summer at the different homes in the settlement. Mr. Hustler, a medical student teaching at Paramount during his summer vacation organized the first Sunday School where Elk Point now stands. He was assisted by Mrs. F. Pinder. He lived in a tent in Charlie Hood's yard and rode a bicycle to school. Lloyd Lambright played the violin for Sunday School. In 1910 the Elk Point School was built and service was held there. The first church service was conducted by two settlers, Billy Wolfe and Mr. Wm. Ramsbottom.

Excerpts from the 1909 and 1910 Vermilion Standard tell of Rev. M. Thompson preaching at J.D. Hunter's home with a good attendance. Also noted at Hunter's, Rev. Wm. Simon of Vermilion and Rev. Reid, overseer for Alberta, held service. These ministers were available for weddings, funerals and baptisms, travelling on horseback or by horse and buggy. Settlers were always glad to "put up" the minister overnight, give him good meals, and care for his horse.

Church was not only a religious gathering but also a time for visiting, learning the news of the district and discussing problems.

In 1911, Mr. Harry Day, an Anglican missionary, came to Elk Point from Vermilion. He served the community until his death.

In 1918 Rev. J.B. Lorentzen, a Lutheran, became the first resident minister in Elk Point. He was a dedicated man who served Glendon, Lea Park, Flat Lake and Minburn. 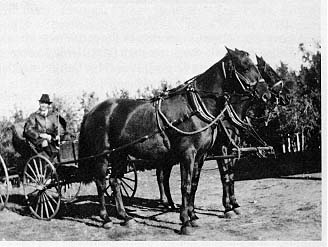 Rev J B. Lorentzen on his way to hold service at Lea Park, about 1922

A small church was built during 1921. It was constructed of native lumber and largely by volunteer labor. This building served until the spring of 1928, when it was destroyed by fire. A new church was built on the same site. In 1927 the manse was built. Among those who erected these two buildings were George Shortridge, Helge Hesselgren, Rev. Harry Day, Orb Fish, George Bartling, Jesse Pool and Grant Arnold.

Rev. Mr. McCusker of Onion Lake supplied services here at times during 1922 to 1924. 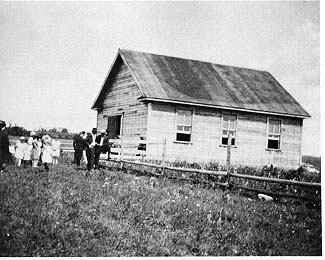 He was followed by Rev. Reg Smith. He and his bride were from England. They organized Girl Guides and Boy Scout groups, visited everyone in the district, helped in all community projects, and were respected and loved by all. They left to do missionary work in British Guiana, where Mr. Smith died of typhoid. 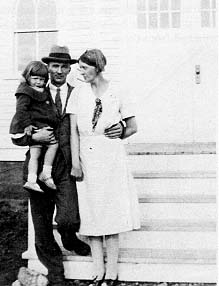 Mr. Whaley was the next incumbent, from 1931 to 1934. He had the first milch goats in the district. He had a fine family of children and was an enthusiastic Long Lake fisherman. C.G.I.T. flourished in his time here. Records indicate that on September 29, 1933, seventeen girls met with leader Hazel Nelson to form a group. This group later increased in size to include twenty-nine girls. The first officers recorded were president - Vivian Flanders; vice-pres. - Ida Markstad; secretary - Myrtle Nelson; treasurer - Ann Miller. The group was known as the Winona group. 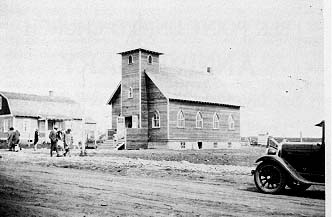 The United Church and Manse in the 1930s. Later the church was stuccoed.

In 1934 Rev. Sam Marshall came to Elk Point. He was a real builder, a good visitor, and excellent preacher, and was thoroughly liked by the whole community. He organized the choir, equipped the church with pews and pulpit, did a lot of cement work around the front of the church itself, and raised money for church purposes by several successful carnivals He stayed for five years. Mrs. Marshall had a beautiful sop rano voice which she used to improve greatly the musical service of worship. Mr. Marshall was succeeded by Rev. C.R Corcoran. Mrs. Corcoran was an ardent church worker. 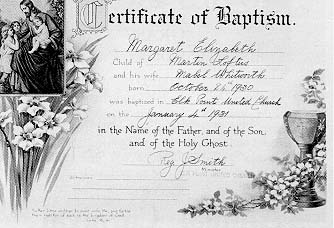 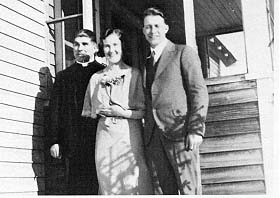 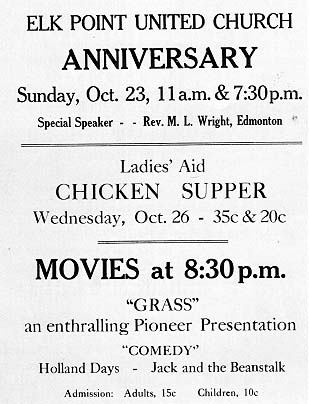 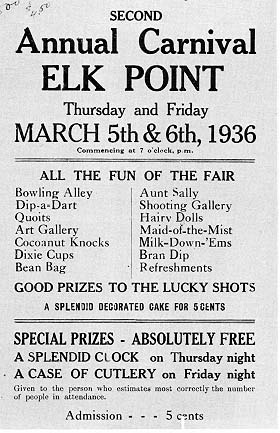