Bob could not be considered a pioneer of the Elk Point community but, because of his role in the R.C.M.P. in the early history of this area, and because he was such an interesting and well known character, we are pleased to list herein a few of the most colorful details of his time in the West.

We neither affirm nor deny any of the following information. It has been gleaned from a number of sources and, though some parts may sound unbelievable, they may still be valid because the hardiness of the pioneer and the truth of his experiences are in themselves now almost beyond belief.

Robert Chanler was born in Ireland on February 6, 1877, and went to Liverpool, England, as a small boy, so he always referred to himself as a Liverpool Irish. He migrated to Toronto in 1899 and worked on a farm near there for two years. He came west to Edmonton with a group of U.S. boys in 1901. From there he went to Fort Saskatchewan, looking for a location and also to investigate the possibility of joining the police force. He joined in May, 1901, on a temporary basis, with an option to leave when he felt like it. His main objective was to see and learn something of the fabulous west he had heard so much about before leaving his homeland.

In 1902 he was sent to Saddle Lake to quarantine the Indians because of a serious outbreak of smallpox. His beat extended from roughly west of Saddle Lake to North Battleford; this was entirely on the north side of the North Saskatchewan River. He frequently rode along the old telegraph trail from St. Paul de Metis to Frog Lake, getting his assignments from the small telegraph stations along the way. Therefore his beat included the present Elk Point area He had mentioned that much of the lower-lying portion of the townsite was under water in those early times. 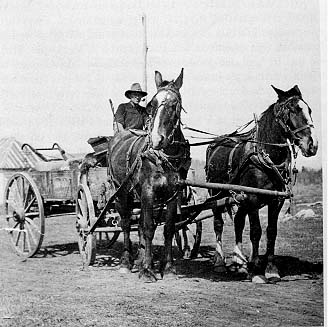 Bob Chanler on his homestead

The story is told that on one occasion, while acting on orders from Edmonton, he had apprehended a Metis near St Paul who was accused of cattle rustling. When he tried to contact Edmonton, he found the line out of order so he wired North Battleford for orders. His instructions were to deliver his prisoner, Joe, to the detachment at the centre. On the way he became lost. He confessed his problem to his prisoner, who cheerfully agreed to act as guide because he said he knew the trail from his cattle stealing expeditions in that direction. By the time they reached North Battleford, and this final act was necessary, Bob felt some sadness when hi turned his accommodating prisoner over to the authorities for trial.

Bob applied for his discharge in 1906 and settled on homestead -- N.W. 24-56-5-W4, near Mooswa, the site of telegraph station and settlement. This is the present family home of Don Lorenson and family. He named his farm '"Coyotes Rest" and placed a sign on his gate to inform passersby of that title. Several reasons for that designation have been suggested, one being that, if any coyotes came in search of Bob's chickens, they would instead find their final resting place there. In any case, Bob was an excellent rifle shot, and this skill undoubtedly ensured that he had meat on the table regularly because moose, elk and deer were more plentiful it earlier times. He told of one occasion when the winter was particularly severe, none of the settlers had been able to travel to Vermilion for supplies, and food was very scarce. Bob saw an elk on a hill about a mile away so he made his way closer and fired at it. The elk dropped but got up immediately so he shot again and the elk went down to stay. When he reached the spot, he found not just one elk but two. He shared the meat with his neighbors, as was the custom then, and so the emergency was relieved for everyone.

His farming consisted largely of dairying. It was as a result of an encounter with a tempremental Jersey bull that he received solicitious mention in the St. Paul Journal. A news item had reported that he had been injured by this bull to the extent of requiring hospitalization. This response follows, and clearly illustrates his Irish wit and humor.

Under the Frog Lake news published in your Journal, February 1, I see that I have returned home from Elk Point Hospital where I have been confined for some time as a result of injuries received when trampled on by a mad bull.

I entered the hospital on Nov. 14 for an operation for "Hernia," incurred years before the bull was born, left on December 22nd after a most successful operation, I am now completely recovered.

So much publicity has been given to my bull fight, detrimental to my reputation as a bull fighter and the steadiness of lies used that I forward a true report of the fight.

While taking my bull in off his picket, on September 25th, he attacked me. I had a rope and pull leader on his ring and was able to side step his blows and tie him up in the stable.

Next morning I shot him and dragged him down the river hill. Near the bottom he skidded and rolled on top of me and I had trouble in getting from under photos

At no stage of the fight did he succeed in striking me so I was not injured. "Vengeance is sweet" and any remarks I made would not be fit to publish in your "Journal;" neither did the team run away.

Total casualties - bull lost his life. I had a valuable 45 cent pipe broken and lost a pants button.

Next time I pull off a bull fight I will get a reliable reporter to witness it, if I have time. 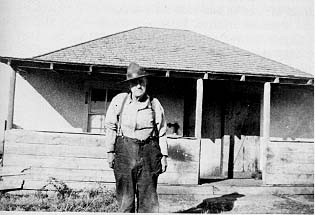 When World War I broke out, Bob re-enlisted in the force and spent a few more years as a member of the R.C.M.P.

He is reported to have been honored at a Golden Jubilee banquet in Elk Point for fifty years of courageous pioneering. He was presented with a Jubilee Scroll to commemorate the occasion.

Robert Chanler passed away in March of 1956 at the age of 79. He remained a bachelor so there are neither sons nor daughters to bear his name or cherish his memory; all that remain are his silent grave, his Mountie uniform, his pistol and rifle, and his personal diary all safely harbored in the Fort George Museum in Elk Point. These form only mute testimony to a long and vigorous pioneer lifetime. It is fitting therefore that written testimony to his existence be chronicled in this book.