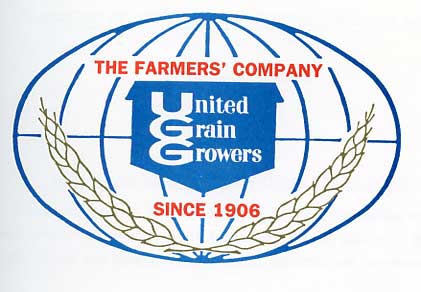 U.G.G. were advised by CNR in August 1926 that the rail line was being extended from St. Paul Junction 21 miles to create 3 new grain delivery points â Heenan, Armistice and Elk Point. A site was immediately reserved at Elk Point and the elevator built the next spring.

By 1930 there were three companies on the market â McCabes, Pool and U.G.G.

U.G.G. opened at Elk Point August 1, 1927 with E.D.J. McDonnell as Manager. He remained as Manager for 37 years. A second elevator was purchased from McCabe Grain in 1961 along with one at Armistice. The Elk Point one became U.G.G. No. 2 but was operated by John Juba along with No. 1. The third U.G.G. elevator came by way of a trade with Alberta Pool December, 1983. Paul Ewasiuk is Manager in charge of all three plants.

United Grain Growers built the first elevator in Heinsburg. The foundation was laid in April, 1928, rail arrived in October and the elevator was taking in grain on December 5th.

A flour shed was torn down at Vermillion in 1933 with material moved to Heinsburg and re-built. It is a mark of the times that it was then profitable to move second hand lumber many miles. With changing times, the elevator was sold to Alberta Pacific Grain Company in September, 1966.

In 1954 CN extended the Bonnyville Subdivision to Grande Centre to service the R.C.A.F. development in the area. U.G.G. followed the rail extension by building a new 70,000 bushel elevator, coal and feed sheds and a 5 room manager's dwelling in August, 1955. By 1968 a bulk fertilizer plant had been added in a U.G.G. â Sherritt Gordon agreement. Sadly on September 26, 1976 fire destroyed the elevator and farm supply sheds. The Manager's home and fertilizer storage plant were saved but were sold in 1977. The elevator was not rebuilt.

U.G.G. LOCAL BOARD AT GRANDE CENTRE

After the elevator burned in 1976, the Local was discontinued with members being attached to Elk Point for voting privileges.