Dad as a Parent

It is hard to describe exactly what impresses you about your dad's parenting. Leonard Cohen once said that the greatest hero of the 20th century was the worker who went to work each day for 40 or 50 years to provide for his family. Our mom and dad certainly were there for us in their 61 years on the job. But what things made them stand out to us. After canvasing my brothers and sisters on this, I found it somewhat depended on when you grew up in the family. 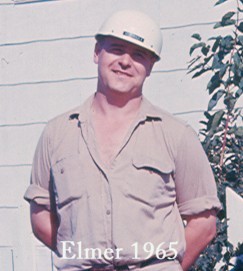 My first memories come from when mom and dad were in a building mode, like all young couples in their twenties and thirties. Pay was lower, finances were tight, and there were many essentials to acquire. As well, Riverview was a smaller place: the Windsor Club was starting, Lindbergh was the commercial centre (Young's General Store was where most purchases came from), we were getting our first car, and the roads were very bad.  Dad's focus was on keeping his family, studying all the time and mixing with the entire Riverview community. This changed over time as our family grew, our stuff grew, and both our local community and Canada changed. By the early nineties when mom and dad moved from Lindbergh Stacey remembers a far different household both in size and in the way it ran. Stacey mentioned that none of her friends had anything near the amount of entertaining going on in their homes as was happening at mom and dad's house.  Every early morning, the ladies of the townsite came for coffee and coffee shop was there most of the day. The evening was dominated by visiting and meetings with a few movies to watch. Dad thrived on this socializing.

From the mid-sixties, Gary remembers my dad in one image: sitting in his chair in the living room either watching TV, reading or sleeping. He remembers dad was quiet but when he said something, he was usually right. He had thought it over and there wasn't much purpose in arguing with him.  Life insurance example 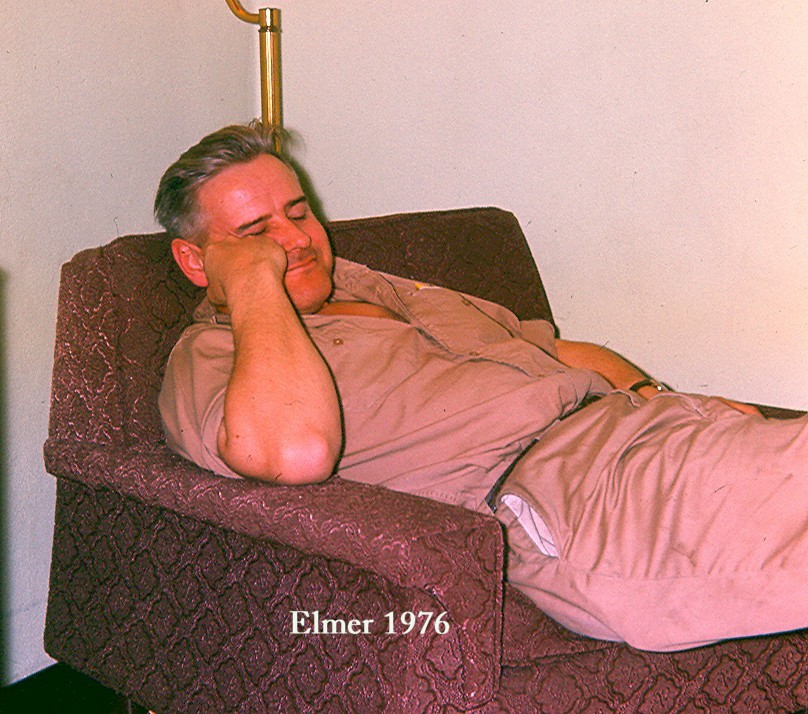 Gary also remembers Dad's love of playing marbles; and card games.  We all agreed he was not a hockey fan. Once dad drove us boys to a big game; I was coaching, Kevin and Gary in an early game in Elk Point's new arena and mid game someone said look back there. Dad was sitting in the bleachers reading the Edmonton  Journal in the midst of a lively game.

Gary also remembered him always building toys and guns for us, â¦ and for the kids in the neighbourhood. These plywood toys were a fixture of a couple of decades of play on the townsite.

Our constant new Renos like the room additions, painting, recarpeting and the building of the garage were remembered by us all; building bees at Riverview were so common; sometimes neighbours were out there working on our garage before we finished breakfast.

Gary commented on Dad's love of gardening; and also his hate for snakes. Todd story

Christmas was a big event at our house. The excitement was built up for months. After all the hype of the weeks before Christmas, at our house we had to eat breakfast, then we had to lining up from smallest to littlest at Christmas at the door to the rec room so dad could film our excitement as we came in to find our gifts.  This really put the day on our yearly map. This tradition continued until the move to Elk Point ; later the big Christmas meals replaced the line-ups and new traditions served our ever expanding family.  For the past few decades we have had 30 to 40 people to a Christmas event.

Dad was very cautious about many controversial topics like politics and religion. He had his own beliefs but did not reveal them to us. We talked about the topics a lot but he kept his own intentions private. We rarely knew how he voted.

Mavis remembers how  'He didn't mettle in our lives, he was very non-judgemental. After she was no longer a teenager, he would discuss many things with you but if it was your decision, he let you make the decision and live with it. She found 'Joking with him was easy; particularly when he visited one on one with you.  He also could keep a secret. If you told him something in confidence, he rarely let others know about it. He was quiet when mom was around. His sense of humour was great especially with our spouses. He liked to tease them in his gentle way.

Our spouses tended to see him as a soft spoken gentle man who was easy going and interested in having fun. I am sure few ever saw him angry but then few of us did.

She also found that he respected others and found ways of getting that respect idea to you. Kevin also noted the respect he had in the community and how carefully various communities listened to his advice. I am not sure if this says more about dad or about Kevin.

Karen, much younger than some of us, remembered watching horror movies with dad and the boys; getting to sit on his lap in all the scary parts with the boys hiding behind the big chairs. She said they all screamed in Jaws when the shark appeared.

When Karen was growing up Dad was very involved in the Elks and on the go all the time.

Dad sometimes disciplined by waving the finger at you when he was very serious.  When Karen was raising her children one time, she and mom warned Elmer that he had to stop teasing the kids or he would be punished just like them â usually standing in the corner.    He persisted and he had to stand in the corner just like them.
Kevin, like many of us, remembered the constant building projects which usually were planned around an upcoming event to get them done. Kevin's wedding reception was to be in the new large garage in Lindbergh so it had to get done on time. That was really upping the pressure. 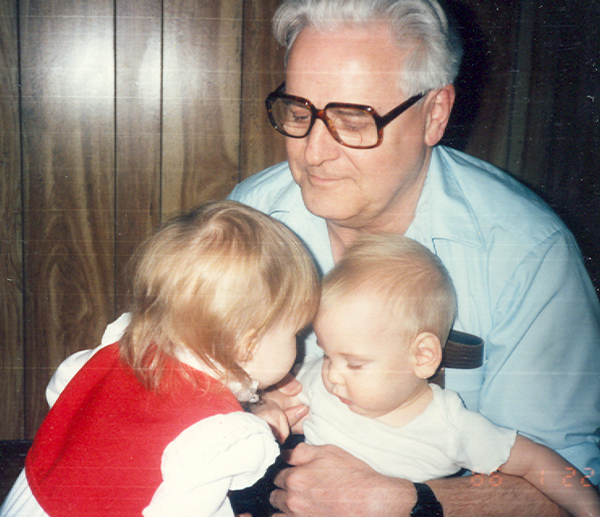 Marvin â Dad had a unique sense of community and our responsibility to it. We all do many community activities following in his example. His sense of fairness seems to have been communicated to all his kids and to some of his grandchildren. Most of his kids can plan well and handle the logistics of any situation very well because of the example he set.

Our family history has effected how our families are today. Dad's parenting comes through in how all of us respond to our own families and how we work together. His example will be remembered for a long time.

As a little boy he was allowed to have store-bought cereal while Carl and Ernie had to have porridge their father made early and then help with the chores. Elmer had a collection of 'hot wheels' cars and trucks which he kept in this 'garage' under the kitchen coal and wood stove and which he played with by the hour. The cereals of that time had prizes in the boxes or premiums to be sent for of which Elmer accumulated many. One was a tiny little camera with included chemical. The pictures were developed in the sun on the window sill and many of them were nice and clear â about 1' long and 1' wide.

The family were living in the old house then which had 3 rooms in the house proper and a long lean-to on the west side which was the kitchen and a little bedroom that was rented to Mr Harke â a blacksmith at the mine. There was no insulation so it was very cold with windows being covered with frost all winter.

Another room in the main house had a little heater in it and it was there that Grandma Ohl stayed. When Elmer was about three he broke his ankle and had to lay in bed with his foot raised on a wooden box. We had a small slate and chalk and I would five him arithmetic questions to do while we were at school. He was a fast learner so that by the time he started school he could do Grade 2 or 3 work.

He was always at the top of his class and the teachers always gave him glowing reports. Another thing that helped him in his school work was that he started reading the Edmonton Bulletin about age 7 or 8. Mr MacPhee always told us of how Elmer at age 8 would come into his store and discuss politics with him. Elmer was for Social Credit and Mr MacPhee was Liberal.

Elmer was also an excellent artist and filled all the used scribblers with hand drawn comics, sometimes continuing a story and sometimes single squares. He often toon quite a fibbing from Carl and Ernie about his 'exiting' comics â but then they could hardly draw a stick man. Most of his comices had a war them or detective story much like those in comic books. Elmer also had amassed a large collection of comic books. Many must have been first issues as he always got them as soon as they came out.

Elmer was easy going always had a little entourage of pals with him â Peter and Andrew Marcinkiw, Buster Sylvester, Mike Drongle and many more. He breezed right through high school with some of the highest marks but sadly, he couldn't get any further education soon so he went up to the coal branch where most of the young people of Evansburg had gone for employment as Evansburg was like a ghost town. 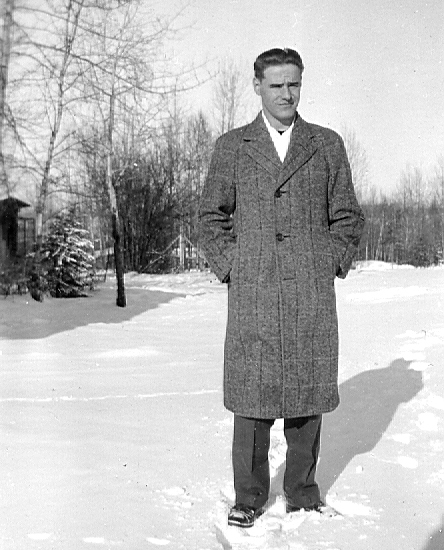 He met Lenore Ford and they were married in December 1949. He home studied and earned a first class steam ticket.

Another memory of Elmer is how hard a time he had getting up in the morning. As Hilda and I were leaving for school, Aunt Clara was still calling him to get up. Fortunately he was good in school because I am sure his teachers found him missing the first period in many occasions.

After he got his ticket he applied for a job in Wabanum Power plant which was just starting up. However, doctors discovered he had had rheumatic fever as a child so could not work in such a damp environment. He then took a position with the salt plant at Lindbergh where he worked until his retirement. In his later years Alzheimer's took over and his brilliant mind was left behind. Odd as it seems we in his family were unaware that he had had rheumatic fever. 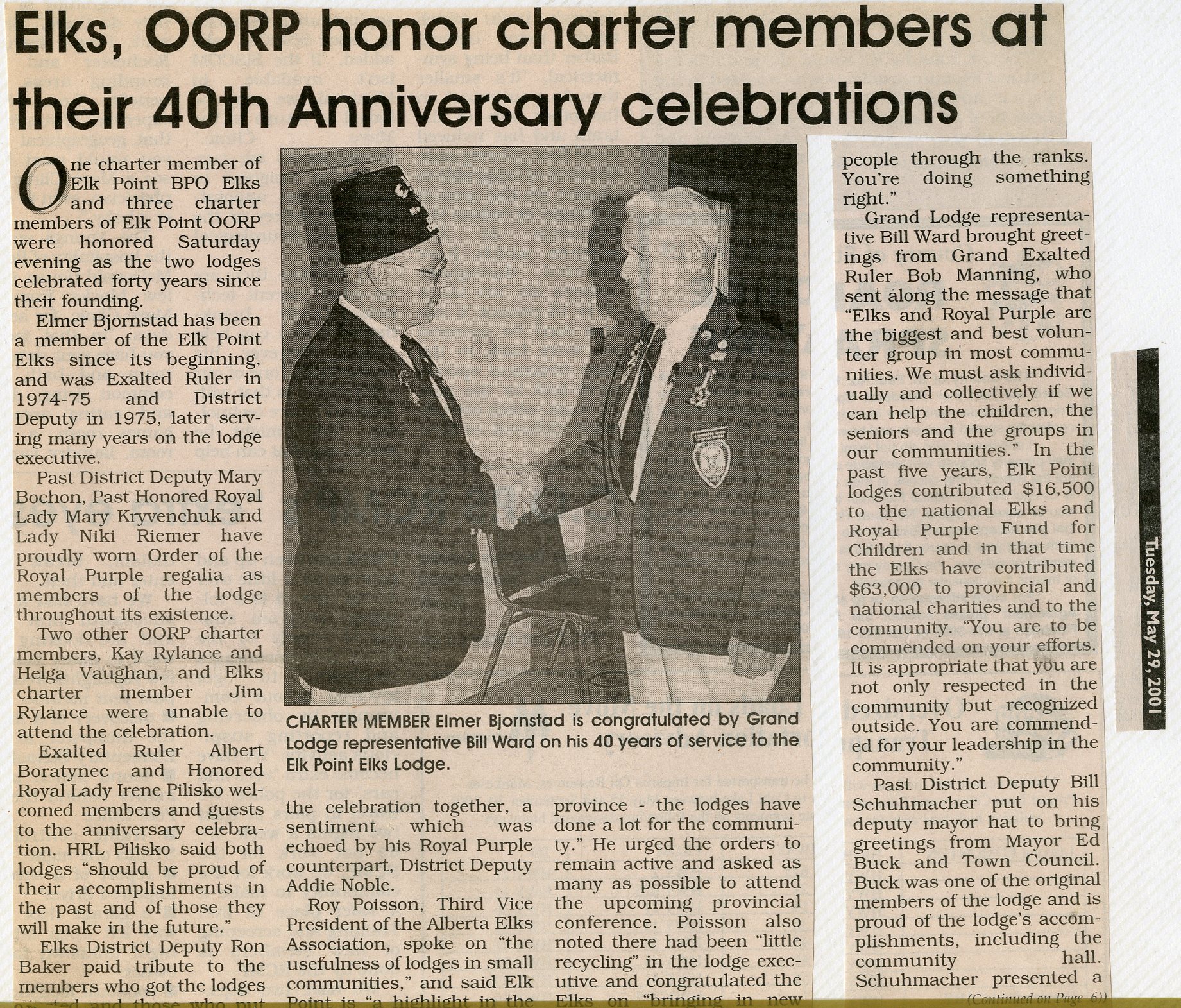