The Canadian National Railway arrived in Edmonton from Winnipeg on November 27, 1905, the year Alberta became a province. Rail lines fanned out from here to meet the evergrowing demands of settlers. It must have seemed an eternity for the people in the Elk Point area for it wasn't until September 22, 1927 that the first train whistle was heard in Elk Point, a period of twenty one years after the first settlers had arrived. The railroad had been extended to St. Paul in October, 1920; even this was a boon to the people here because it cut their freighting distance in half. The railroad pushed on to Heinsburg. November 1, 1928 issue of St. Paul Journal - Steel laid to Heinsburg and was opened to traffic December 7, 1928.

From the St. Paul Journal:

"T.J. Christina, C.E. with fourteen assistants arrived Tuesday to resurvey the remainder of the C.N.R. line east of Elk Point to St. Walburg at the other end of the steel. It is freely circulated on the street today, that the railroad will be completed next summer between St. Paul and St. Walburg."

Under the heading "Railroad to Elk Point" the following appeared in a February 25, 1926 issue of the St. Paul Journal.

"Word has been received from H.W. Cross, member in the federal house for Athabasca, that practically all the work necessary on the St. Paul branch line of the C.N.R. is to be done this year at an estimated cost of between $525,000 and $625,000.Twenty-one miles of line will be built, of which one mile is already graded. Engineers of the railways department have been instructed to proceed with the work as soon as possible, and the twenty miles of track will be graded and the twenty one miles of steel laid this year. The line runs from St. Paul towards the Saskatchewan boundary, and before he left Ottawa, the Athabasca member left the matter with the cabinet after making strong representations to have the line completed through to the eastern boundary this year. In addition to providing considerable work in the district, the construction of the line will serve a valuable farming area and result in much money being circulated in the St. Paul district, this summer." 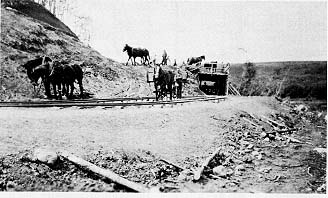 Railroad construction on the grade to Elk Point. 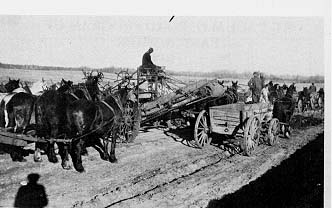 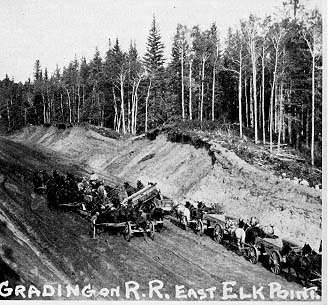 Railroad construction on the grade east of Elk Point 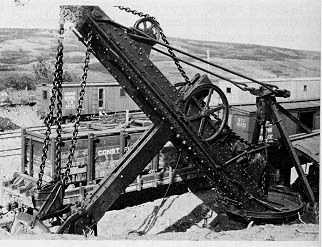 "The future town of Elk Point can now almost hear the whistle of the train, the long wait of 15-20 years has now been broken."

R.R. Contractors at Elk Point, W. Van Buskirk with 75 men and 150 teams is camped on P.J. Keitges farm about 5 miles east of Elk Point, and railroad grading is proceeding rapidly. The best grade of gravel has been found on the school section.

It was a long vigil for these hardy pioneers like Chas Hood for instance, who came here twenty years ago by canoe down the Saskatchewan looking for ranch land but instead found a most beautiful stretch of level country far beyond his expectations. Mr. Hood has a hardware store and is Elk Point's first postmaster, the office having been opened 16 years ago.

Heinsburg is the end of steel, there being a gap of 39 miles to Frenchman's Butte lacking for farmers to send their produce east more directly. This gap was a political football for years with each succeeding politician promising to build it. Had it been possible to build it with promises it would have been the best railroad in the whole north west.

The outside construction work from Elk Point to Heinsburg was done by Stewart and Cameron at an estimated cost of $745,000. 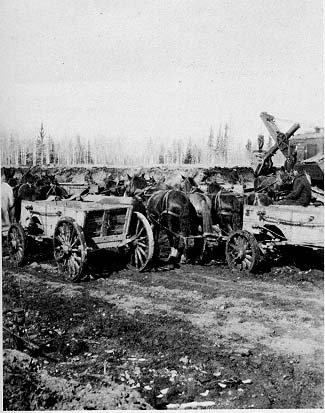 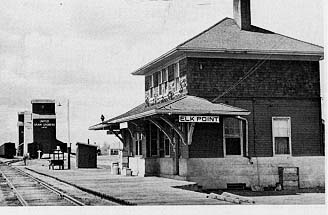 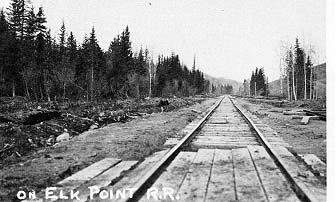 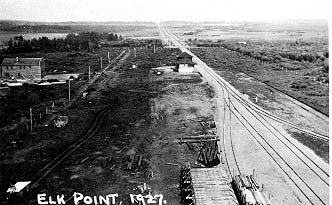 gets shorter and shorter